Die Before Your Death

At the time of death, the dying man possesses certain attributes whose inculcation is understood from the following aphorism: “Die before your death.” The attributes that are in the perfect state in the dying man are tawba (repentance), zuhd (abstention), qana’a (contentment), tawakkul (trust in Allah), azla (solitude), tawajjuh ila ‘Llah (attention directed to Allah), sabr (patience), rida (being pleased with Allah), dhikr (remembrance of Allah), and muraqaba (meditation).

One has to inculcate the above qualities, which overtake a dying person to a high degree.

This is the concept of “Die before your death.”

One has to transform one’s condition so as to be saturated with the conception of “death before death.”  In this earthly life, the body is on earth, but the spirit should be directed to the Hereafter and be in communion with Allah.  Possession of even the kingdom of the earth should not affect one’s heart.  The heart should be empty of the world at all times.  The sign that this lofty state has settled over one is total abstention from everything that is branded as evil by the Shari’ah.  The mind, tongue, and the whole body have to be sealed from evil.  The heart is to be emptied of all things other than Allah Most High.  It has to be adorned with praiseworthy character traits.

A man dwelling in this lofty state of purity and communion with Allah Most High is always aloof from gatherings of futility.  Whatever diverts the mind of the seeker of Allah from the remembrance of Allah is vain and nonsensical.  The seeker refrains from association with men of falsehood and corruption (batil).  One who does not pursue the Path in quest of Allah is in fact a man of corruption.

[Written by Shaykh Masihullah Khan in ‘The Path to Perfection’. He was a renowned student of Shaykh Ashraf Ali Thanawi and extracted teachings in the book from the various works of Shaykh Ashraf Ali Thanawi. Shaykh Abu Yusuf Riyadh ul Haq discussed ‘Dying before death’ in a brothers’ majlis (gathering for spirtual training) held on 26th April 2000]. 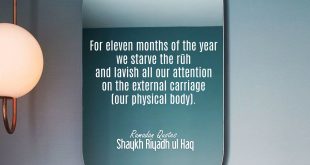