Visualise the words of the Prophet ﷺ. Gold is worth a lot and is the one solid, stable currency. After the credit crunch the value of gold rose exponentially. People were relying on the safe investment of gold when the property market crashed.

We measure gold by ounces and grams i.e. in small quantities. In this hadīth, we are not talking about one gold ring or one gold bar, or even a tray of gold bars. The Prophet ﷺ says a whole valley between two mountains filled with gold! If man had that, what would he do? He would desire a second valley of gold. If he was given that he would desire a third to add to his two valleys.

The Prophet ﷺ says that nothing will fill the cavity and vacuum in man except the dust of the earth. Man has a cavity or a vacuum in him, which he wishes to fill with material possessions. The possession of highest value is gold but even one, two or three valleys of gold will be unable to fill that vacuum. The only thing that can fill that cavity is the soil of the earth when he is buried.

[This short excerpt is based on Materialistic Greed & Rivalry A Tafsīr Of Sūrat ʾl Takāthur which was delivered by Shaykh Riyadh ul Haq on 24th May 2013]. 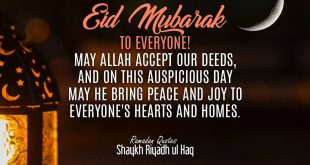