“One of the most detested people in the Sight of Allah is he who is obstinate and argumentative.”
[Bukhārī]
By constantly debating and discussing a person’s heart becomes hard, his ʿibādāt (acts of worship) become mechanical and all he thinks about and is perturbed about are the fine points of religion, which are best left to the ʿUlamā (scholars), whilst at the same time neglecting the major aspects. This leads to a character of criticizing others starting by those around him, followed by those in religious authority (present and past) and even as far as criticizing the Ṣaḥābah (Companions of Rasūl Allāh صلى الله عليه وسلم, may Allah be pleased with them). Debating, criticizing and obstinacy stem from arrogance.

However the teaching of Islam is that rather being critical of others, a person should be critical of himself. Before thinking of criticizing others a person should ask himself whether he is in a moral or scholarly position to do so and whether it is the genuine, sincere and constructive criticism a Muslim imparts to his fellow Muslim referred to in the ḥadīth,

“A believer is a mirror of a believer.”
[Abū Dāwūd]

What this means is that if a Muslim sees a fault in his fellow Muslim he should sincerely advise him in the best way possible.

[This short excerpt is based on a brothers’ majlis (gathering held for spiritual training) held by Shaykh Abu Yusuf Riyadh ul Haq on 27th January 2001]. 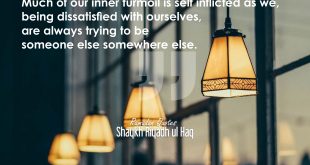 “Much of our inner turmoil is self inflicted as we, being dissatisfied with ourselves, are …