Projection of guilt is a famous term in psychology and is also a trait of hypocrisy. This is where a person is guilty of something and they try and deflect that guilt on to another person. They have no shame in doing so. They are the ones that are lying but they tell the innocent person that ‘You are lying’. They say it with such conviction that the poor, innocent person pauses and thinks ‘Am I guilty?’. These people are remorseless, unscrupulous and lack any sense of guilt. They could be lying through their teeth, but they will gaslight the innocent person and continue to accuse them. The innocent soul is left questioning himself.

Allāh mentions this behaviour in the Qur’an in the context of the hypocrites:

Whoever commits a sin or a grievous error then he casts that sin on to an innocent person, then indeed they have borne calumny and clear sin. [Sūrat An-Nisāʾ4:112] 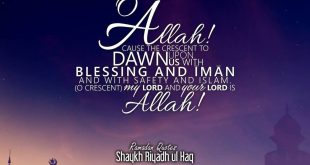 “Oh Allāh! Cause the crescent to dawn on us with blessing and īmān and with …