The Select and The Elect

Islam is the external application of the laws of religion but it doesn’t necessarily mean that that application and that belief is reflected within. Therefore, imaan is a degree higher than Islam. But the degree of ihsaan is beyond both and is reserved only for the select and for the elect; those who are truly close to Allah سبحانه وتعالى. They are those whose ibad’ah (worship), awareness of Allah عز وجل and ma’rifah (cognisance) of Allah is not just limited to ritualistic prayer or to ritualistic remembrance with the tongue. Rather, their belief, faith, and devotion to Allah rests securely in their hearts, and is reflected in their limbs and organs, in their external application of religion and most importantly it permeates their whole body and their very being. So for them ihsaan (i.e. to worship  Allah in a manner as though they see Him) is not just in the heart or the mind but their whole condition is one of ihsaan. Truly that is a lofty degree to which all of us should aspire but we should realise at the same time that it is not easily gained and it requires determination, devotion, perseverance and sacrifice. May Allah سبحانه وتعالى bless us with such a rank of ihsaan. Allah praises those with the rank of ihsaan. In one verse Allah عز وجل says:

And indeed Allah is with the muhsineen.

The meaning of muhsineen is those who occupy the rank of ihsaan; thus, Allah is with those who practice ihsaan. Allah is with them all the time. Allah protects them, surrounds them, supports them and strengthens them just as He specifically and exclusively supports the prophets عليهم السلام, their companions, the siddiqeen (the veracious), the martyrs and those who are close to Allah سبحانه وتعالى in a way which is different to others.

[This short excerpt is based on Lesson 21 of the al Tajrid al Sarih series taught by Shaykh Abu Yusuf Riyadh ul Haq on 26th October 2001. For a more comprehensive understanding of this topic please refer to that lecture]. 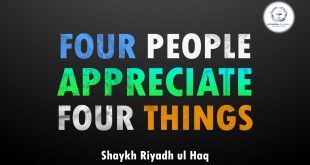